Christmas is nearly here and lots of excited children are in school awaiting the arrival of father Christmas. We were lucky this week to watch the KS1 and Reception Christmas performances and they were fabulous. A busy and productive Christmas crafts afternoon with parents was lots of fun. It was lovely having so many parents join us - thank you.

Miss Mole's class has been watching some erupting volcanoes. Marley completed an erupting volcano as part of her Buzzing Bingo Homework activity and wanted to show the class her erupting volcano. We have also been experimenting with magnets, investigating how they attract and repel with each other but also creating our own games using magnets and magnetic materials.

Mrs McGovern's class have been busy with Christmas cards and finishing off all of our Autumn Term topics this week. The children demonstrated what they have learnt in Science and Geography by completing quizzes about Forces and Magnets and Extreme Earth - well done everyone. We would all like to wish you a Merry Christmas and look forward to seeing you all in 2019. A big thank you for all the presents and cards too - it was very kind of you.

We have had a very busy week, going to the theatre to watch a Christmas Carol, completing friction science experiments and having a Christmas craft afternoon.

In Mrs McGovern's class we learnt all about how tornadoes are formed and the people who chase them to do experiments to find out more about them. In English we have been making wanted posters for the Christmas Elf who has been up to mischief and has gone missing!

This week we have been looking at newspaper reports, we are writing a newspaper of the sighting of daughter of Eve in Narnia. Children have been getting into character and pretending to be witnesses to give their information to the queen and newspaper reporter.

We have also been thinking about catchy headlines that will make people want to read their report. We had some fantastic ideas and we all worked well as group. Well done 3M! Keep up the good work- getting close to the 1000 dojo mark.

In Mrs McGovern's class we have been learning all about open and closed questions and linking them to interviews. We put the answers to the questions into a newspaper report as if we had been interviewing an eyewitness about the landing of the Space Bat Angel in the Iron Man. Lots of dojo points earned this week. In Maths we have been continuing with the 4x table and corresponding division facts before moving on to the 8 x table. 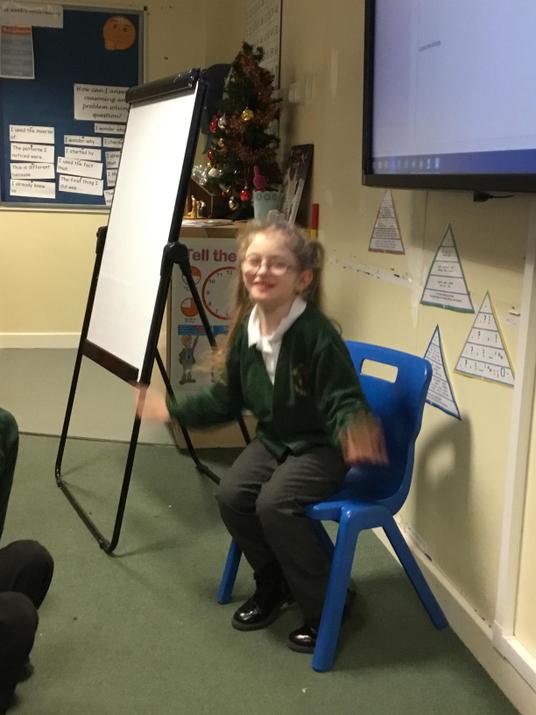 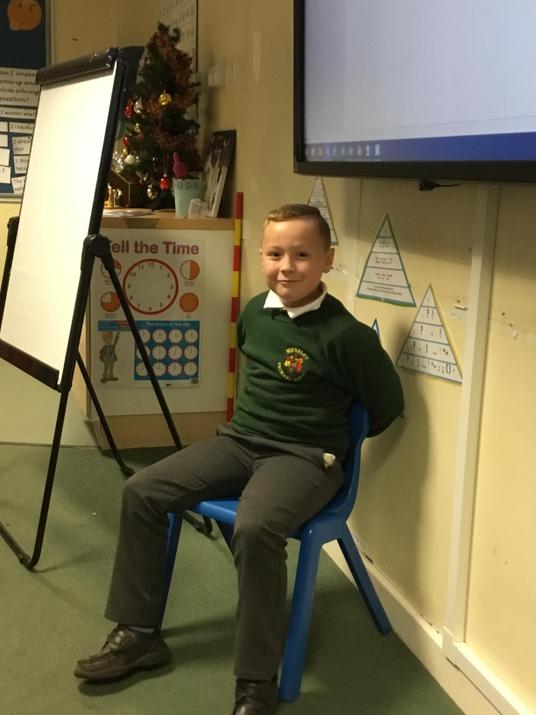 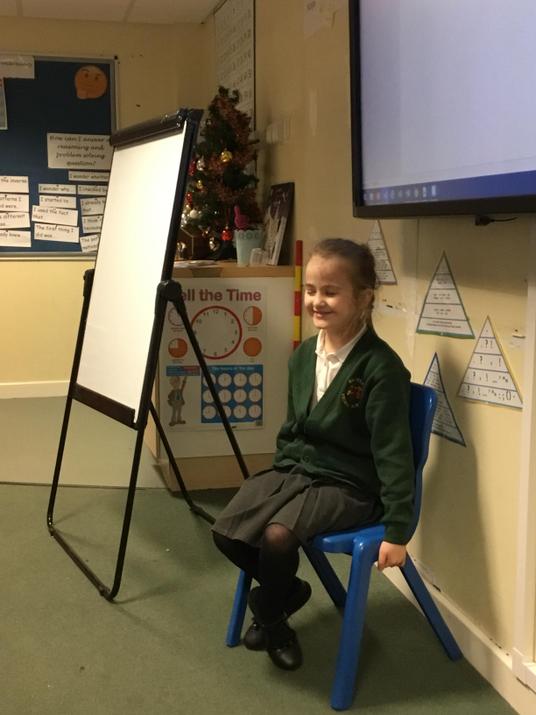 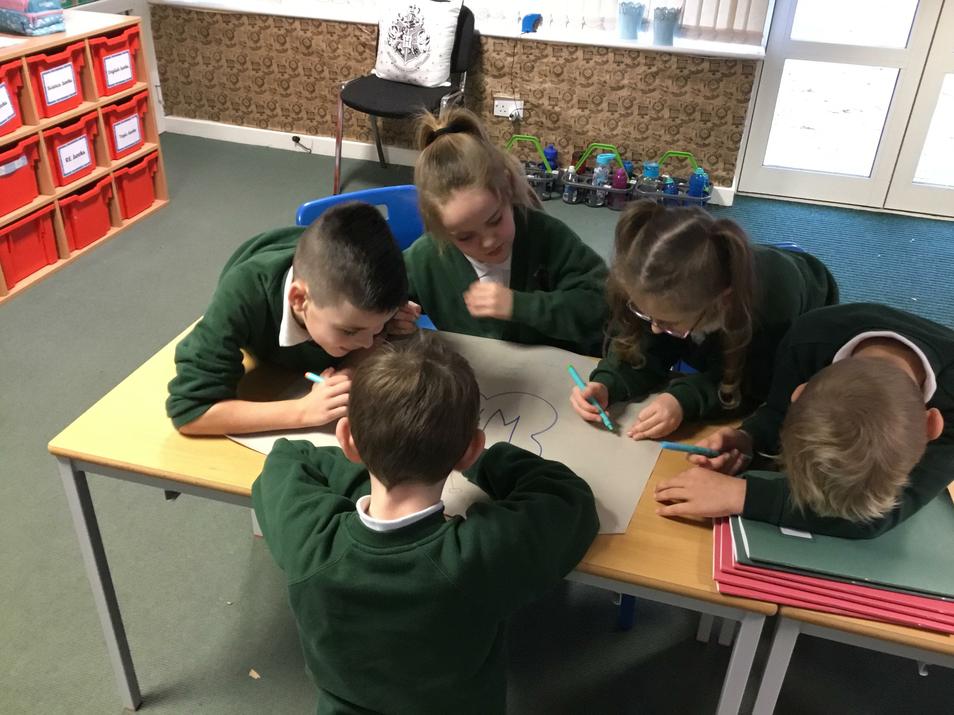 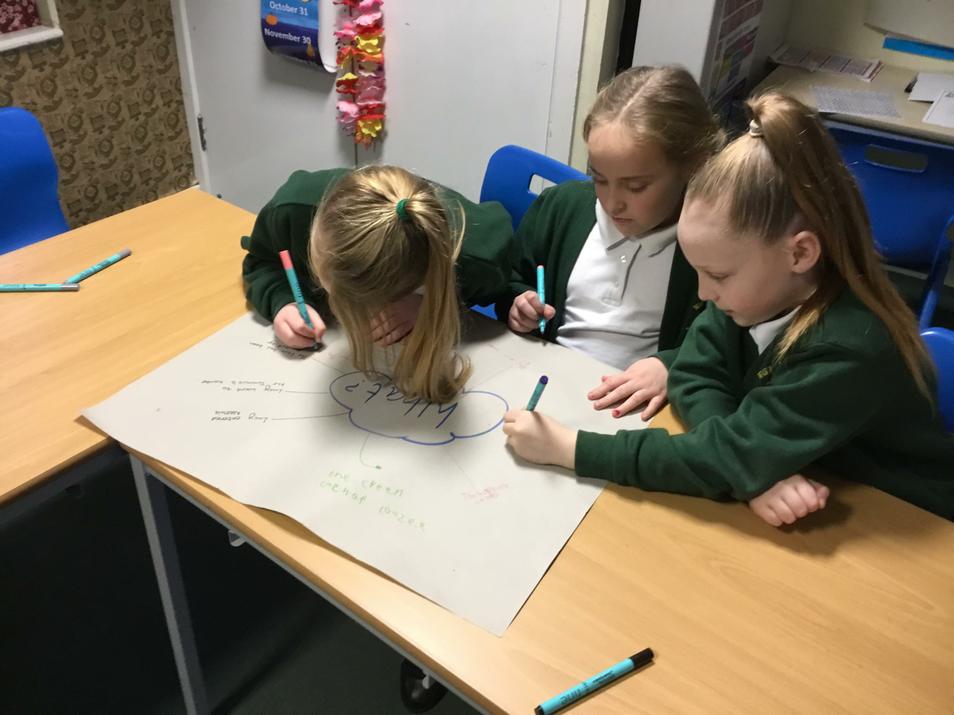 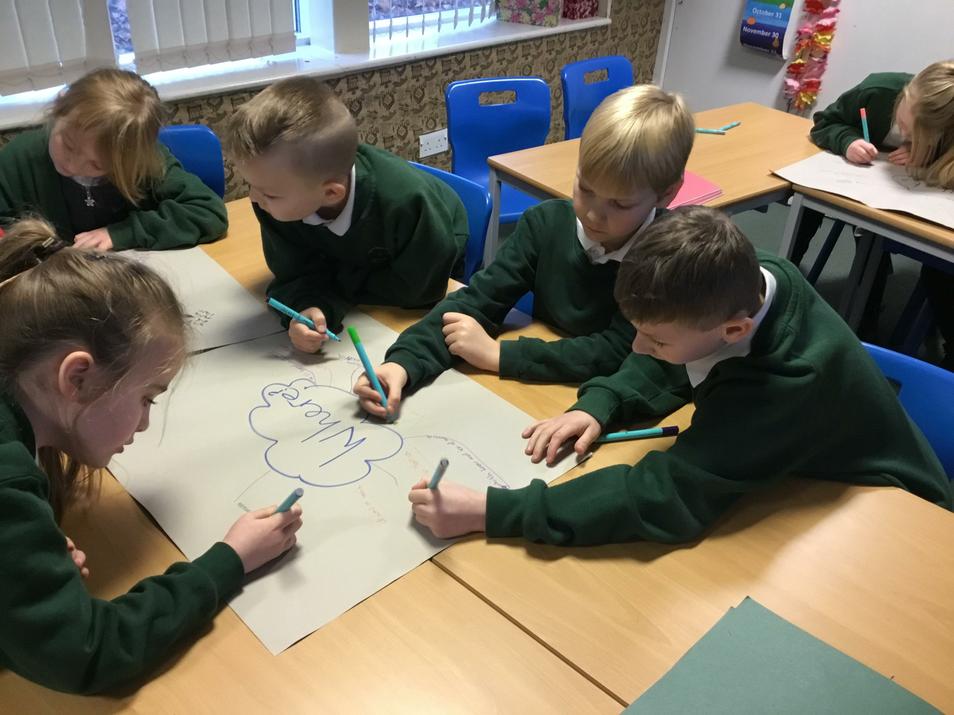 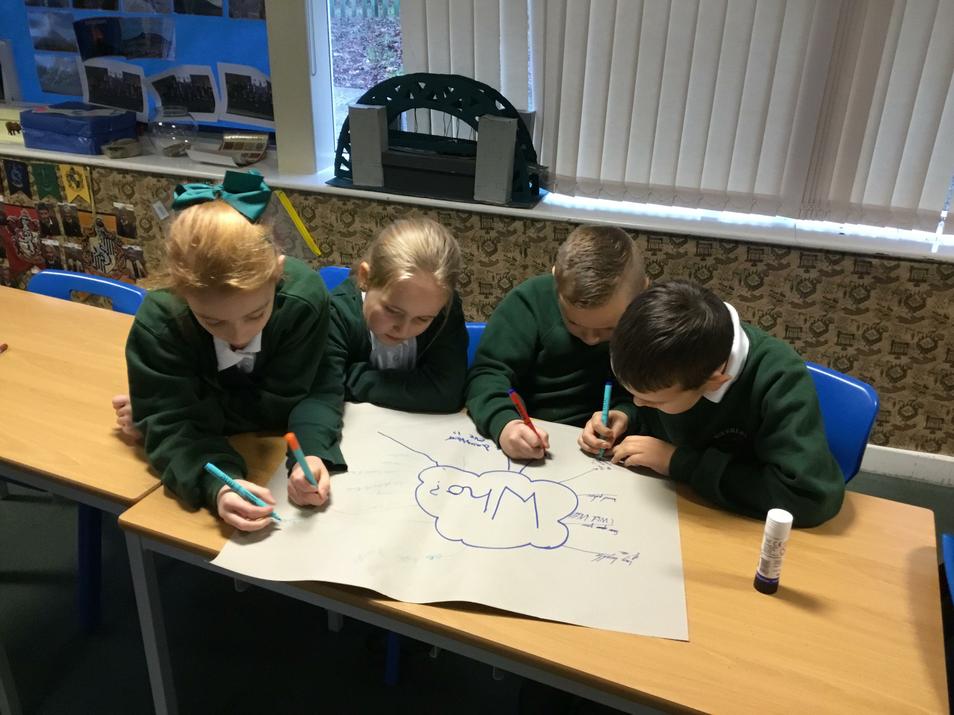 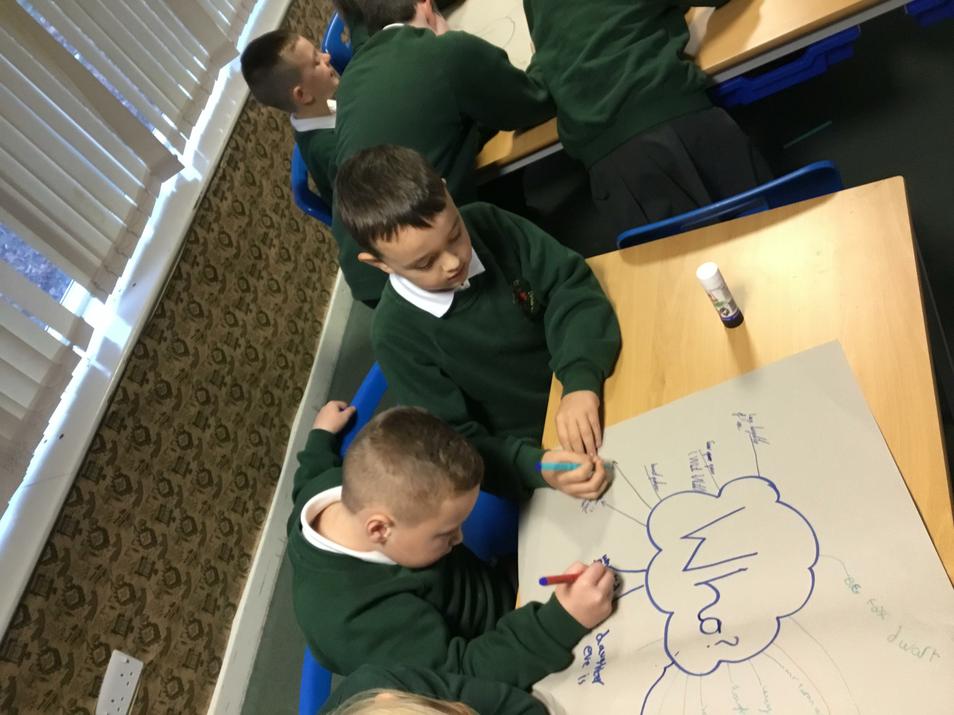 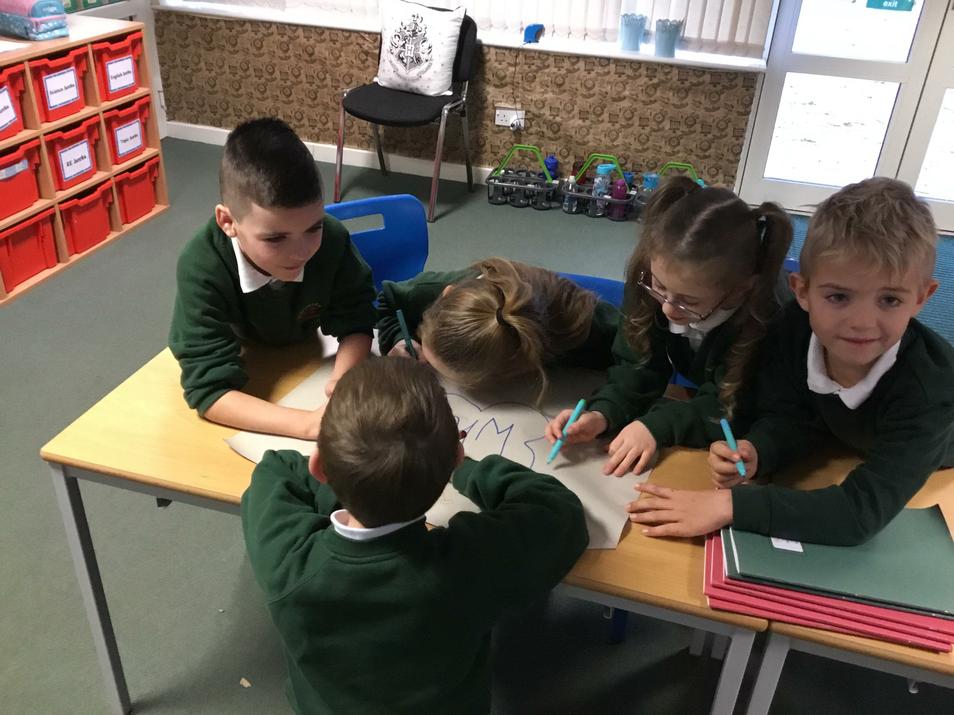 Well done Finley for completing his Buzzing Bingo homework already! He has located the top ten volcanoes in the world on a map. Marley has used her Narnia writing excitement to write her own version of Jack and the Beanstalk as extra work! Well done! More Dojo points for the class.

We have also looked at some safety rules if an earthquake or tsunami was to occur as part of our geography topic. We completed an earthquake drill and stayed under the tables until the all clear had been given. 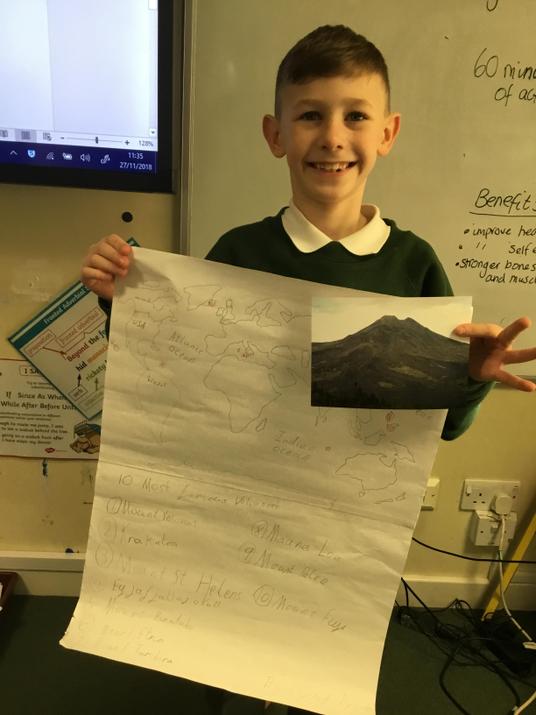 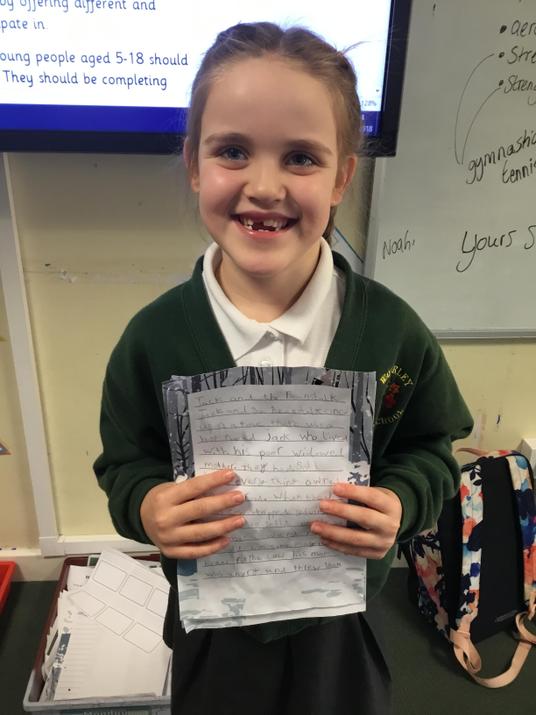 Some fabulous writing this week from Mrs McGovern's class. We are reading The Iron Man by Ted Hughes. The Iron Man has fallen off a cliff and is in pieces. Some seagulls were flying over the scene and witnessed all the parts appear to travel towards each other and suddenly the Iron man was whole again. What a surprise the seagulls got and so we decided to write from the point of view of the seagulls remembering to use first person, past tense and use vocabulary that brings it all alive for the reader - what a lot to think about. Well done everyone.

We have began our new science topic 'Forces and Magnets'. We looked at the two different types of forces- push and pull. In pairs we created a freeze frame of either a push or pull force, children in the class then had to guess what they were doing and the force that it created.

Mrs McGovern's class had a debate about whether it is a good idea to live near a volcano. We used all we have learnt about volcanoes so far to come up with a balanced argument. Soil near a volcano can produce good crops but what about if it is an active volcano? We discussed geothermal energy in volcanic regions and the benefits that can bring. Lots of other reasons for and against were discussed. It was great seeing all the children engage in the debate and enthusiastically share their opinions.

What a fantastic Harry Potter day in Class 3M. We spent the morning writing a letter to Harry Potter informing him of his acceptance to Hogwarts School. We also sealed the envelopes with a special stamp from Hogwarts. We even sent a letter to Mrs Leeming accepting her job application to become Head Teacher of Hogwarts School. Of course she has accepted this position and is sending her owl to school tomorrow to ensure he is trained correctly. In the afternoon, we made Harry Potter bookmarks with the colours of our Hogwarts houses. Let's use these bookmarks to get lots of reading done at home to raise more points for your house!

In Mrs McGovern's class we have been investigating forces in Science. We used a toy car a ramp and different surfaces to investigate the force of friction. We got some surprising results! We used Scratch to do coding in computing adding animation, sound and repeating actions to a character - lots of fun. Friday was Children in Need day and we had a go at cracking a mathematical code using addition and subtraction to find out some trivia and jokes about Children in Need.

We have been experimenting different ways to analyse and express poetry. Lots of children were able to use expressive voices and actions to demonstrate the poem 'The Bug Chant' by Tony Mitton.

We used our bodies to recreate the different layers of the Earth’s structure. Marley was the inner core followed by Charlie and Michael being the outer core. The layer surrounding the outer core was the mantle, we wriggled slightly as it often flows like treacle. Finally, the outer layer was the crust which made us hard and cold.